Pixelcraftian Wiki
Register
Don't have an account?
Sign In
Advertisement
in: Characters, Villains, Side Characters,
and 7 more

In his first appearance, his body (including his arms and legs) was entirely black with 4 dynamite blocks attached to him.

In his plasma form (his appearance can be seen in the episode The New Target), he still looked the same except his body was dark green while his arms, legs, and eyes were light green.

In S.O.O.S 4, after talking to Objan where he said that he had a lot of popularity, his appearance changed. His body is now blue while his arms and legs are light blue. Userunknown's eyes are still green which is his only appearance that hadn't been changed.

In S.O.O.S 9, he had a new temporary form. While his body color hasn't changed, his right part of his head has been shredded, revealing a dark blue color. He has a pair of green arms and legs. His right eye is red.

"This unknown entity is brutal. All we know is that he is the one who has been murdering censor bar."

He has 5 attack, the circles for it being red, which may indicate an even higher attack stat, 5 defense, and 0 friendship.

"All I know what to say is: He's too perfect to NOT be a bad friend."

Present Userunknown's attack is now 1 which is most likely due to his friendly change in S.O.O.S 4. His defense is the only status to not have been changed which is 5. His friendship status is now more than 5 (7) which has the same reason from his attack status.

Userunknown used to be a Blue Kirby in an unnamed animation. However, it has been scrapped for unknown reasons.

A week later when Kirby's alliances had been made, Blue Kirby tried to recover then he ran by a primed block of TNT. All of his body parts were black with some dynamites lodged to him while his eyes and mouth were gray. The next day, his arms and legs got crumbled.

Later, he was addicted to Copy Abilities then suddenly he couldn't move. His face's color turned to red, sensing his own power.

As Keeby went back to Dreamland, Userunknown had an urge to be popular and killed him. Keeby got possessed after that.

UserUnknown had placed second place in SOOS 12 and is currently battling in SMSC. He was eliminated in SOOS 3 with 276 votes but rejoined the game with 565 votes due to his new personality and popularity. 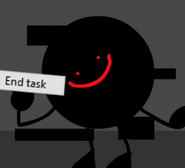 for you to see the Userunknown images, click here