Pixelcraftian Wiki
Register
Don't have an account?
Sign In
Advertisement
in: Pages with spoilers, Cancelled, The Villain Story Episodes

The Cancelled Magolor Reign Ending was going to be the last episode of the "Magolor Reign" arc of Waddle Dee Delight, but ended up being cancelled by Pixelcraftian, which he had confirmed in the Pixareboot Discord and on the Youtube community tab. However, the unfinished episode was later uploaded to Othercraftian on July 22, 2019 with an added "ending" where Pixel decides he's not going to do this anymore and snaps everything back to normal.

"I'm sorry to say this, but the Magolor Reign has been cancelled. I have way too much series' going on and I have not been able to find the time to make the last video in these 2 months. I'm sorry that you have to hear this and I am sad about this decision too, I thought over this for a while (even when I stated there will be a final episode in the direct). I'm not good at sequels, and this series has definitely proved it. Thank you for sticking with the story arc, for now you won't be seeing Magolor anymore and thank you for understanding this decision.﻿" 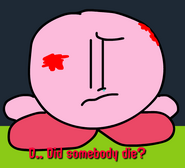