Pixelcraftian Wiki
Register
Don't have an account?
Sign In
Advertisement
in: Characters, OCs, Side Villan,
and 3 more

Not So Easy
Test Dummy is a poyo who appears in Simulation Survival, a Waddle Dee Delight animation by Pixelcraftian.

Test Dummy does not have a description or stats.

Test Dummy is a gray poyo with darker gray feet. He has light blue eyes and a light blue mouth, and passes this feature on to people he infects.

He tried in this video to infect Magolor, but failed and was turned into a Trophy.

Kirb is about to get infected by Test Dummy 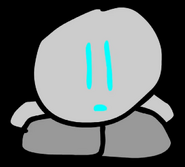