Pixelcraftian Wiki
Register
Don't have an account?
Sign In
Advertisement
in: Pages with spoilers, Characters, Heroes, Side OCs

Splash is an OC who has appeared in multiple Waddle Dee Delight episodes, first appearing in Original Characters. He was created by Bitphone.

Splash is a periwinkle Kirby with purple feet and a cyan barrette.

Splash wields a magical paintbrush, which can bring anything Splash paints to life if he wills it to. Basically, using this, Splash has a limitless arsenal of things to paint to give him the advantage in a fight. However, it doesn’t come without its drawbacks. Splash can only paint so much until he runs out of paint. Luckily, he doesn’t need to carry paint buckets around, as his brush holds paint magically and slowly regenerates paint automatically.

Splash also has a paint hammer, which is very similar to the paint hammer Paper Mario uses in Paper Mario: Color Splash. Though, Splash and his hammer have no ties to Paper Mario. The hammer covers things it hits in paint if Splash wills it to, and it somehow uses up paint from the paintbrush’s storage.

He briefly appears in the background with a painting of Kebe on a canvas next to him.

Splash can be seen near Canvas when he gets infected. Later he appears again with a concerned expression.

In panic, he hits Sani with his hammer, which is giant, after Sani shows him a drawing of Userunknown.

He is one of the contestants. He is first seen with Hanby. Later he hides with the other contestants, but runs away when Starstorm and Kebe get infected. Afterwards, he notices that he left his art supplies elsewhere, and when he goes back to get them, he gets infected. He placed 3rd.

He can be seen on the suspect list, meaning he got invited by Pixel. He is later seen with Sani, Lime, Pixel and DefaultSkin when everyone uses the lamp and sees the murderer.

He is saved by Objan after getting turned into a .exe file by Blur Dee and Spay.

He can be seen with Canvas, Keeben and Tebe after Kirby saves all the inhabitants of Planet Popstar.

He appears briefly at the beginning looking left and right then entering the house, and later is shown painting the walls of a room that the OCs argue over getting.

His photo from the Main OC debut. Art on the left drawn by soopermawio, art on the right drawn by Pixelcraftian. 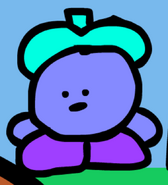 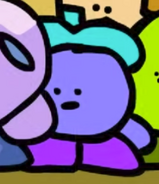 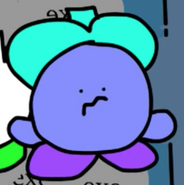 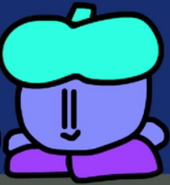 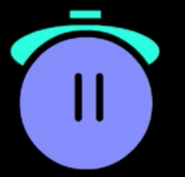