Spay is an olive green Kirby who first appeared in Panic at the Party, as the murderer at Pixel's party. At the time, his name hadn't been revealed though. His personality was introduced in Extinction, where he teams up with Blur Dee to defeat Kirby and the crew. In this episode, he creates a machine that is powered by the End task button that was used by userunknown. The machine was built to delete all the residents of Dream Land, but Kirb, who knew about his plans, made a forcefield to shield Kirby and the crew. His plan was then foiled by the crew and he was really brutally killed by Waddle Dee. 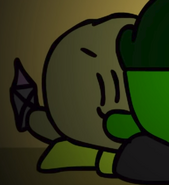 "You're too late!"
Characters