Snans is a minor villain who appears in a couple of Pixelcraftian's animations.

Snans is a skeleton that has a big skull, a square body with a blue jacket and has stick limbs.

Snans appears briefly, frowning and questioning why Dedede doesn't doesn't respect him as a worker anymore after a lot of waddle dees walk past him.after that happens, Dedede say's that he is now a slaverdee. 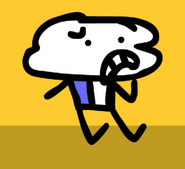