Panic at the Party
Sani (owned by SaniSpark) is a mauve (purple) Kirby with yale (blue) feet. He has stars on the top and bottom of both feet, and one large star on top of his body. He first appeared in Original Characters. He was one of the first OCs in the Waddle Dee Delight series, as he first appeared in the first episode featuring OCs. 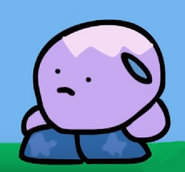 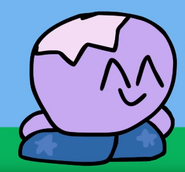 Add a photo to this gallery

Characters
Retrieved from "https://pixelcraftian.fandom.com/wiki/Sani?oldid=6005"
Community content is available under CC-BY-SA unless otherwise noted.