Astro is a puffball came from the faraway moon of Pop star, Lariac Runet.

Astro is a pale, white puffball with slightly grey nubs and feet. He has greenish glow on the eye, and has no specific accesories/hairs, although he is able to use accessories at will.

He wears an old underwater helmet often, especially when he's traveling in the space with his spaceship.

Notably, there is a green antenna connected to him, glowing sometimes depends on the situation. it is about half the size of his nub hands, and it provides light source in the dark.

The helmet is rusty, and it is made out of special materials that endures pressure, radiation, heat and coldness of the universe. it has a small, 'R3-004' serial at the neck part. as well as a clip to connect with the body part of the suit. which is now gone and nowhere to be found.

The spaceship, Criatia 14-4. it is one of the best spaceships crafted in Lariac Runet, and it is made to mostly travel around the multiverse at will. it has basic teleportation ability, as well as attack/defense options. It also has two smaller ships contained within the rocket. both 'Criatia 14-4-1' and '-2' respectively. it has a shape of a typical flying dish. it has the ability to drill through surface, light up areas, or warp.

He usually enjoys remembering and does so well, so he will hardly forget anything. he also is very supportive towards his comrades. he usually think before he moves, and is very down-to-earth when it comes to everything, except sometimes he comes up with ridiculous ideas. mostly related to space. his spaceship itself is a strength as well in some ways. he can also light up using his antenna, in dark places, such as caverns.

He will most likely not approach others unless they approach first, as he feels anxious and nervous meeting strangers. he will be your best friend if you manage to befriend him however. he is also not the person you want when you want to hear cool jokes. his jokes are very awkward.

He has a great understanding towards astronomy and science. however he is not so great in physical attributes, such at force, sports and such. he is also below average in drawing/artistic fields, but is an excellent designer, and makes blueprint of his spaceship as hobby.

He despises space pirates with burning passion, and wants to become the part of space marine. although was never able to achieve his dreams because of his fragile body.

His “antenna” seems to glow at various situation in different brightness, depends on his mood, physical status(such as injury), and surroundings. 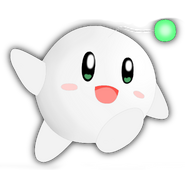 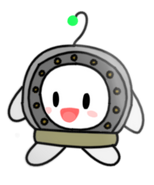 Astro with his astronautic helmet.