Meta Milk is the third episode of Waddle Dee Delight. It aired on April 10, 2018, and is 46 second long. The animation itself is 39 seconds long, and the rest is the end card.

Meta Knight is sitting down whilst looking at the ground, then decides to get up and walk over to Kirby and Waddle Dee, who are drinking milk. Meta Knight demands Kirby to give him his milk, but Kirby doesn't let him, so they fight over it. Waddle Dee finishes his milk and leaves. He comes back with a carton of milk titled "Malk", and places it on a platform. Kirby and Meta Knight notice the milk, but Kirby takes this distraction to his advantage and grabs the milk out of Meta Knight's hands. 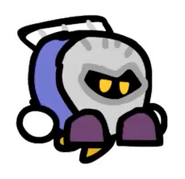 Meta Knight demands Kirby to give him his milk, but Kirby protests. 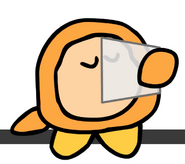 Kirby and Meta Knight violently fight over the milk. 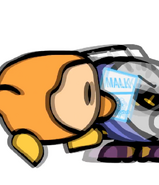 Kirby steals the milk from Meta Knight.
Add a photo to this gallery

Retrieved from "https://pixelcraftian.fandom.com/wiki/Meta_Milk?oldid=2983"
Community content is available under CC-BY-SA unless otherwise noted.