For the actual Mario, see here.

Mario was a fighter in The Ultimate Smash Bros Series later to become a character in animations.

Mario appears at Clobbering Dat Dair Kerby at the end card. He does pretty much nothing aside from sitting at the bottom left corner.

Mario appears as an actual character this time, standing on some kind of elevated land. his voice was revealed, and he was shown being pink, normal, and rainbow. His limbs are no longer wide.

Mario is now pixelated with his Super Mario Odyssey colors.

We take a look in Mario's universe, which shows him in his 8-Bit Colors. 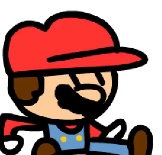 Mario, being affected by 'Maximum Pink'. 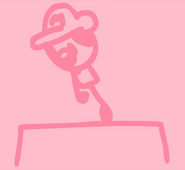 Mario on that elevated land. it is unknown where this place exactly is. 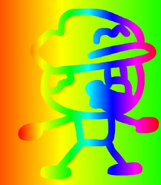 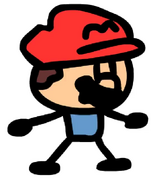 Mario after the colors are restored.

Stat card of Mario.
Add a photo to this gallery
Characters
Retrieved from "https://pixelcraftian.fandom.com/wiki/Mario?oldid=6381"
Community content is available under CC-BY-SA unless otherwise noted.