1(killed by lava when Kebe stepped on his hand, making his trophies normal)

New with the Old
"For the real Magolor, Click here"

Magolor is a character who makes his first appearance in Magolor's Magic! and is the main villain of his Villain Story.

Currently, Magolor does not have a description or stats.

Magolor wears a blue hood that has a yellow gear as the rim and has a blue and gray belt. He has two pointy ears that are yellow and gray at the tips.

Magolor plays a major role in this video. He teaches Kirby and his friends how to do magic, purposefully hurting them in the process. Kabe grows suspicious, and asks Magolor some questions. Then, Magolor pulls out a trophy gun which turns Kabe into a trophy. Throphy gun is an reference to Super Smash bros Brawl

Magolor also plays a major role in this video, as after he turns Kabe into a trophy, he decides to rid the world of OCs leaving only Kirby standing. After being called an offensive[1] and annoying little poyt, he turns Kirby into a trophy which made him the only person left in the universe (aside from Galaxy and Pixel) with only Objan being the one survivor who freed Userunknown. 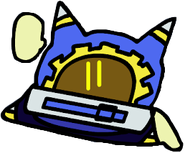