Pixelcraftian Wiki
Register
Don't have an account?
Sign In
Advertisement
in: Pages working in progress, Characters, Main Characters,
and 7 more

Pangender (all genders at once; up to viewers interpretation as to which one they view him as)

The Return of "Steve?"
Kirby is the main protagonist of Nintendo's Kirby series of video games and has a crucial role in Pixelcraftian's Kirby-themed animation series.

"Kirby is a very friendly puffball. He is determined to beat any challenge! He can do everything with his friends. Though, he can go ahead and tackle them. He's good at fighting but not enough to kill his Friendly Foes."

Kirby's body color is pink and his shoe color is red.

Kirby's body and shoe color are slightly more pink than before.

Kirby still has his original WDD design, since SOOS takes place before Spay and Blur Dee set off the .exe bomb, causing Kirby and his friends' colors to change.

Kirby's appearance in this series mirrors his looks in the Kirby anime. His body color is darker and his shoe color is much darker than his WDD counterpart. Kirby's eyes are circular, and he has a dark blue eye color with white shines a the top. He also has blush.

Kirby appeared in Maximum Pink as the protagonist of this video. Solving the issue by going outside of the screen. Kirby has also made friends/was friends with Waddle Dee (now Bandana Dee). 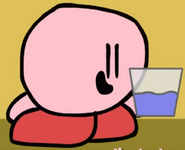