Pixelcraftian Wiki
Register
Don't have an account?
Sign In
Advertisement
in: Pages working in progress, Characters, Main Characters,
and 2 more

3 (Killed by Userunknown, Pixel (during SOOS) and got blown up by Blur Dee)

New With The Old

Kebe is a character in Pixelcraftian's videos who was, along with Kabe, drawn and brought to life by Kirby.

Kebe is also one of the most popular characters in the series, owning a fanbase shown in Detective Kabe!.

"Kebe is an unpredictable kirby with excellent dance skills but very dumb decisions. She is a formidable foe if she's angry, though."

Kebe has 1 attack, 0 defense, and 3 friendship.

Kebe is a khaki colored poyo with brown feet. She has a pink bow on at almost all times. 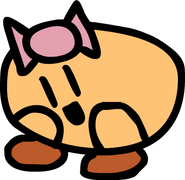