3 (Killed by Pixel, blown up by Blur Dee, and trophy-ized by Magolor)

"Kabe can basically be called a detective. Like Kirby, he is very kind to his friends but shows more courage. He's ready to fight and tries his very best! He's not really on the defensive side, though."

Kabe is a light green poyo with dark green shoes. 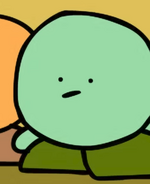 appearance inspired by the Kirby anime - (left) kebe - (right) kabe
Add a photo to this gallery
Characters
Retrieved from "https://pixelcraftian.fandom.com/wiki/Kabe?oldid=6601"
Community content is available under CC-BY-SA unless otherwise noted.