Detective Kabe!
Hanby (owned by Doxsero) is a character who has appeared in multiple of Pixelcraftian's Kirby animations. He was originally just an OC, but was later promoted to side-character status due to be being more relevant than other OCs, like Starstorm.

"Hanby's" a handy guy, enough said. ...Ok, now seriously, his hand mobility has helped in lots of situations; They're quite exploitable though. He also never hesitates when assisting his friends, but the millenium question: Where did his floating hands come from? An unanswered mystery."

Hanby is an orange puffball with light brown feet. His hands are floating besides him, and they each have a gold ring on the back of them. 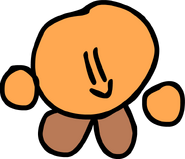 Add a photo to this gallery
Characters
Retrieved from "https://pixelcraftian.fandom.com/wiki/Hanby?oldid=6794"
Community content is available under CC-BY-SA unless otherwise noted.