Pixelcraftian Wiki
Register
Don't have an account?
Sign In
Advertisement
in: Pages with spoilers, Stubs, Episodes,
and 4 more

Clobbering Dat Dair Kerby is the first episode of Waddle Dee Delight. It aired on April 7th, 2018 and is 1 minute 1 second long. technically, the video ends at 0:46. meaning the animation is only 46 seconds long.

the video starts with King Dedede in a white, empty space, with jolly green greens remix. with Kirb appearing slightly after, sliding from the right, from outside of the screen. making common kirby noise. Kirb stands upright with a popping sound soon after. then king dedede's face changes from being happy and looking at the screen, to being upset, even angry, while looking at kirby. Dedede slides upward, changing his face once again, ascending towards outside of the screen. Kirb looks at dedede without any words. kirb falls on their back soon after.

Scene changes to a yellowish background, with Snans looking at the screen. soon after, Dedede slides in. with snans looking at dedede. yelling "I Need A Monster To Clobber That There Kirby". the camera zooms into Snans' face, then with the few sound effect of sans talking, he turns into Clobbah boi. the screen turns back to full shot, now with King Dedede and Clobbah Boi. The screen changes to King Dedede with comical face, suddenly zooming into his face while his facial expressions change rapidly. yelling "I'll Kick Dat Kirby to the Curb".

The screen cuts into white space again, this time with Kirb standing upright. Clobbah boi appears from above suddenly, with the music changing to more dramatic one, kirb's face shrinks and slowly moves back, but Clobbah boi ends up stomping Kirb with its feet. making a noise. Kirb is flattened.

Clobbah boi shakes violently while grabbing his face, and suddenly stops just as the music stops, with his face frowning. Clobbah boi explodes right after. spewing ashes everywhere. The video ends with King dedede and Kirb covered in ash.

The ending screen features Kirb, Mario and Waddle Dee(now Bandana Dee) at the bottom of the screen, with the word 'End' in the top left corner, soon, Kirb spins around, shooting what seems to be magic at nowhere with his Star Rod. the annotations appears as Waddle Dee's face shrinks. 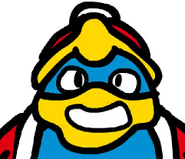 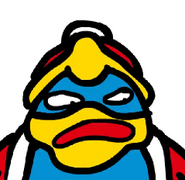