Pixelcraftian Wiki
Register
Don't have an account?
Sign In
Advertisement
in: Pages with spoilers, Characters, Villains,
and 2 more

4 (killed Kirby, Bandana Dee, Kebe, and Kabe in separate options in The New Target. Not canon.)

A Lesson In Clobbering

Clobbah Boi, also capitalized clobbah boi, is a robot who was hired by King Dedede to kill Kirb in Clobbering Dat Dair Kerby. In The New Target he is summoned by userunknown to kill Kirby and his friends. In both of his appearances, he gets killed by Kirb.He is summoned the first time by Snans.

Clobbah Boi appears at Clobbering Dat Dair Kerby as the antagonist, stomping on Kirb and getting killed. he made his first appearance here, and first death here.

Clobbah Boi gets summed by userunknown to fight Kirby and the crew. 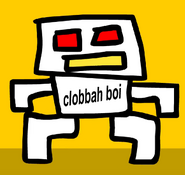 Clobbah Boi before Kirb attacks him.