Not So Easy
Bluo (owned by wazzuper25) is an OC who appears in Pixelcraftian's videos.

Bluo is a blue Waddle Dee with purple shoes. He has a slightly lighter blue face.

In Original Characters, he first appears when he greets Kabe. He later follows the group into the OC world.

In Super Smash Poyos, he and one of his alternate costumes can be seen near two Woashis, which explode. The explosion KO's the alternate Bluo, and the original Bluo survives. Bluo's number is 10.

In Panic at the Party, he cameos on the "suspect list" that Aid had made. He later appears again standing next to Poop Kirby.

In The Unnamed Present, Bluo cameos on the box-art of the Super Smash Poyos game that everyone gets at the end.

In Not So Easy, he briefly appears as a trophy in the background behind Starby. Interestingly, his colors are slightly darker than usual. 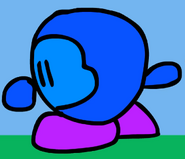 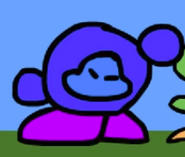 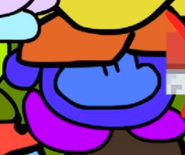 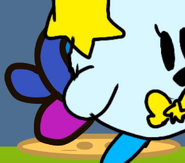