Pixelcraftian Wiki
Register
Don't have an account?
Sign In
Advertisement
in: Pages working in progress, Characters, Main Characters,
and 3 more

Bandana Dee (or Waddle Dee) is one of the main characters in Pixelcraftian's animations. He plays a major role in many Waddle Dee Delight videos.

"Bandana Dee is a cute friend of Kirby's friends, he also has great strength and curiosity. He tries to help others but also shows some courage!"

Bandana Dee has 3 Attack, 3 Defense and 4 Friendship as stats.

Bandana Dee is a standard orange Waddle Dee that has lighter orange feet. He wears his bandana sometimes, typically in battle.

Bandana Dee now has a reddish-orange body color and has yellow feet. He wears his bandana at all times.

Bandana Dee appears as a co-protagonist of the episode, helping Kirby on his way to restore the place which was losing colors other than pink. they ends up succeeding. Notably, Bandana dee with a rainbow color appeared for a brief seconds.

Stat card of Bandana Dee. It is in his previous, Waddle Dee state.

..With a shrunk Face. 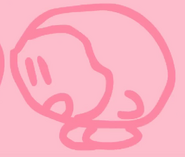 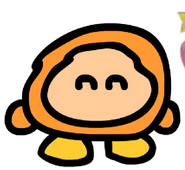 Bandana Dee in Maximum Pink, after colors are restored.

Rainbow "Form" of Bandana Dee. it lasts for a few seconds. 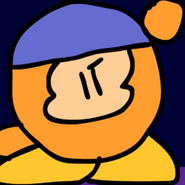 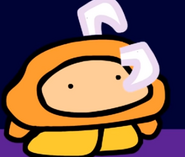 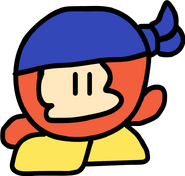