Pixelcraftian Wiki
Register
Don't have an account?
Sign In
Advertisement
in: Pages working in progress, OCs, Main OCs,
and 2 more

OCs Buy A House.
Astro (owned by prod) is a main OC who appears in Pixelcraftian's videos.

Astro is a white poyo with light grey shoes. He has a green antenna on his head.

Astro first appeared in Alone and Afraid, where he appears as one of the many possessed OCs that are seen in the scene after Magolor is defeated. Like the other OCs in the scene, he turns back to normal a few seconds later with a confused look on his face.

In Detective Kabe!, Astro is seen behind Refroid after Refroid had revealed Kebe and Kabe's fusion, Keban, in front of him and many other OCs.

In OCs Buy A House., Astro is one of the 9 OCs who were living in the house that Antigrafo had bought. He first appears at the beginning, recording Antigrafo who then reveals the new house he had bought. Astro then asks Antigrafo if it was just for the two of them, to which Antigrafo responds that he had invited some others too. Astro later appeared trying to stop the argument that had been going on about who should take the room that Splash had painted over, but later ends up being caught in the fight. After the fight is over, Astro then tells the others about how they hadn't paid the taxes and other payments and how there weren't enough rooms for all of them. He then tells them to expect bankruptcy. 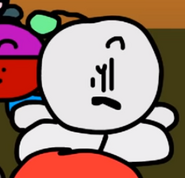 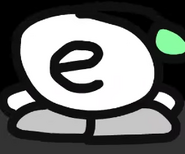