Pixelcraftian Wiki
Register
Don't have an account?
Sign In
Advertisement
in: Pages with spoilers, Pages working in progress, ATKW Episodes

ATKW 1: A Suitcase of Problems

ATKW 1: A Suitcase of Problems

TBA
ATKW 1: A Suitcase of Problems is the first episode of Anime, The Kirby Way, a YouTube series created by Pixelcraftian. It aired on December 3, 2018, and lasts 3 minutes and 8 seconds. It would have came out sooner, but it crashed during development and was corrupted.

The episode begins with a shot of Kirby, then shows Tiff and Tuff setting up a time capsule. It then cuts to the N.M.E. Sales Guy, King Dedede, and Escargoon, who are plotting to defeat Kirby. Escargoon questions if the monster the N.M.E. Sales Guy would give them would lose as usual, and King Dedede punches him. King Dedede then says Escargoon has a point, and the room suddenly turns blue and purple. Suitcase is then summoned, and the walls and floor turn back to normal. King Dedede picks up Suitcase and calls it a Waddle Dee ripoff, asking what it even is. The N.M.E. Sales Guy then explains how to use it. He says you have to put some stuff in it, press the button three times, then it will be able to fight. King Dedede then orders some Waddle Dees to make a cake for Suitcase, and they do so. The screen then cuts to a time card, saying "10 or so hours later" with a subtitles saying "this probs won't happen episode 2" and "it's the first episode what do u know". Afterwards, King Dedede presses the button on Suitcase three times, and its face turns rainbow for a bit. It then goes back to normal, and Escargoon says it still looks crummy. However, Suitcase then jumps up, and goes to Tiff and Tuff's time capsule. He takes it, but Kirby notices him, and attempts to inhale him. He accidentally inhales a trophy in honor of Pixel's laziness, then becomes Sleep Kirby. Tiff asks what kind of Kirby he is, and Meta Knight states that he's Sleep Kirby, and says he has one powerful attack, which is the bubble he is blowing. Suitcase punches Kirby, but then gets caught in a bubble. It gets lifted into the air, and the bubble then pops, killing it and releasing all the items from it. The video then cuts to Pixel showing a group of Steves the episode, and the Steves complain. Pixel then says he probably won't upload next week due to Super Smash Bros. Ultimate coming out soon, and the Steves get mad. The video cuts to Pixel's face, and Jingle Bell Rock plays.

The first teaser. From the version that was lost.

The second teaser. Also from the lost version.

Another teaser. Tiff's pose in this shot became an emoji in Pixaria. Also from the version that was lost.

The first glimpse of Cappy Town. This does not appear in the final version since the episode was lost. 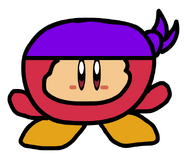 Bandana Dee, who would have appeared in 3 secret places in the first episode as an easter egg, but this didn't happen due to the episode being lost.

Tiff and Tuff with their time capsule.